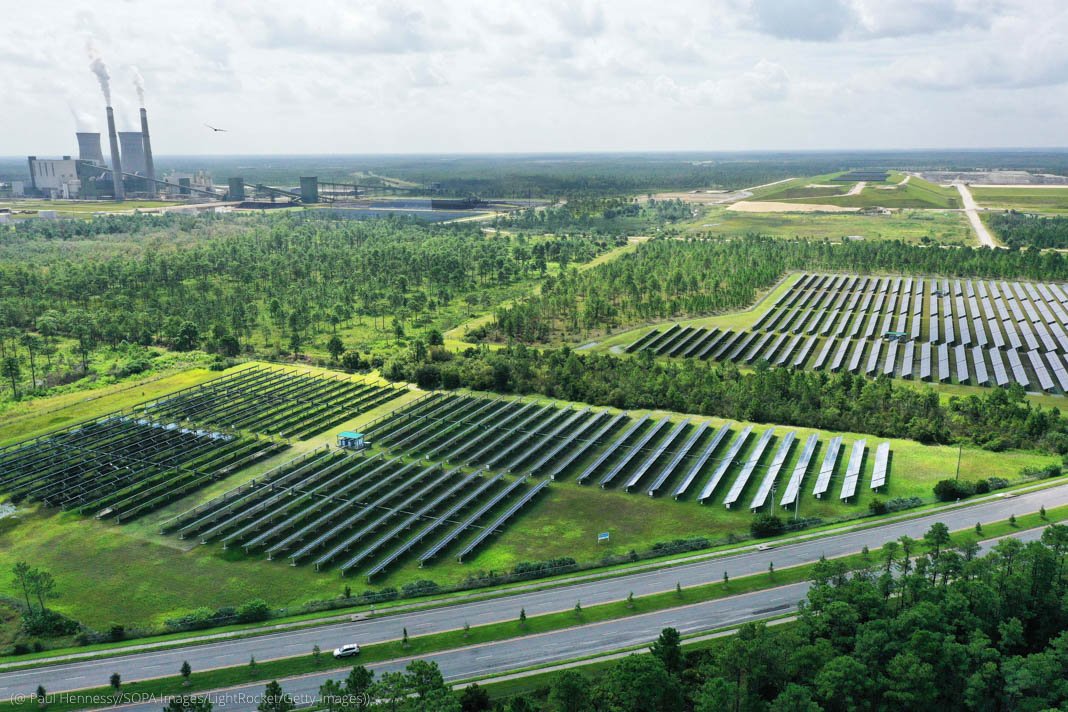 Ethanol emits more greenhouse gasses than the gasoline it is supposed to replace. Additionally, ethanol (corn) farms greatly under-utilize land, which is one of the greatest resources in the United States.

Of the 92 million acres of corn planted in the United States every year, roughly 40 million acres (1.6% of the nation’s land) are primarily used to feed cars and raise the octane of gasoline. If this land is repurposed with solar power, it could provide around three and a half times the electricity needs of the United States, which is equivalent to nearly eight times the energy that would be needed to power all of the nation’s passenger vehicles were they electrified.

However, if the nation were to transition this 40 million acres of fuel to solar-plus-food (agrivoltaics), it could still meet 100% of its electricity needs, while also powering a nationwide fleet of electric vehicles.

In a good year, 1 acre of corn is expected to generate around 328 gallons of ethanol. Since ethanol contains only ⅔ the energy of gasoline, a comparable crossover SUV averaging 30 miles per gallon would travel only 6,600 miles per year on that acre of corn.

That’s not a typo – solar panels produce roughly 200 times more energy per acre than corn. This striking figure makes an ironclad case in favor of converting vehicles to electricity – and that’s before we take into account the environmental and health benefits which would result from the profound reduction in emissions.

The “recent” news that US ethanol emits 24% more emissions than gasoline, is in fact old news. Politics in the United States, influenced by agricultural industries, fossil-fueled fertilizer manufacturing, and perhaps a well-intentioned ulterior motive of underwriting food for national security, has led to a massive subsidy program for corn growers.

In fact, since 1980, pretty much all of the additional acres used to grow corn have gone towards fueling vehicles, not humans. We need not point fingers at farmers – they simply produce what the market demands. But these demands, which our civilization imposes on our soil, have resulted in far-reaching consequences.

Corn is particularly adept at siphoning nutrients from our soils. Restoring these nutrients requires fertilizers sourced from fossil-fuel feedstocks and produces more CO2 emission than any other human-driven chemical process on earth. Meanwhile, solar can help alleviate our nitrogen-fixation emissions crisis as well, by pulling fertilizer out of thin air.

With these factors in mind, we propose a new national security initiative – one that combines solar electricity generation with food production in order to solve many issues in one fell swoop. We urge landowners, developers, and legislators to prioritize the replacement of ethanol field corn with agrivoltaic operations. These operations should specifically target locations with the highest risk for fertilizer runoff. It’s time to bring our agrarian society into the 21st century.

And, just for the sake of fuel security, let’s incorporate some hydrogen generation into the picture as well.

About 40 million acres of ethanol field corn could be used to generate 14 petawatt-hours of solar electricity, if deployed in standard, highly efficient installation techniques. A reminder – that’s 3.5 times more energy than the current US electricity consumption.

However, that is not the goal. Even though the United States is still in the nascent stages of agrivoltaic development, it’s fair to say that solar-plus-food facilities will generate at least half the amount of electricity per acre as we leave space for farming machines. Analysis from Germany showed that potatoes could be grown at 80% of their initial volume, while electricity could also reach 80% of its potential.

In the scenario where we only get 50% of the solar output from the land, our repurposed acres would generate around 7 petawatt-hours of electricity per year. That’s eight times the amount of electricity required (~0.88 PWhrs/year) to push 3.26 trillion passenger car miles in the US every year, and enough left over to electrify the nation 1.5 times over.

Of course, we don’t need (or probably want just yet) to power the United States only via solar power. Thus we suggest powering the nation with only 50% solar – thus setting our electricity for our cars and our general power use around 16-21 million acres.